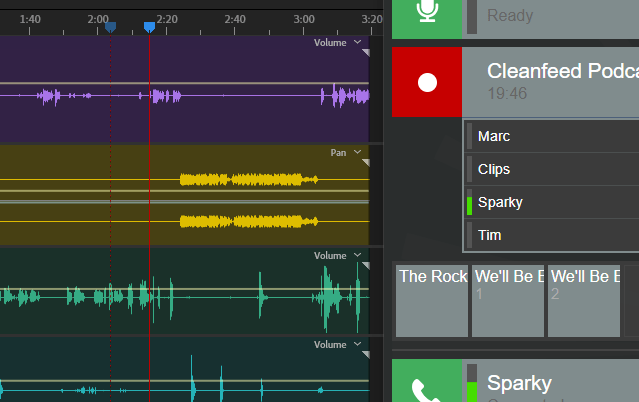 It’s one of our most asked-for features, and it’s here. This is the first beta, which means we need your feedback to really make it the best! Say goodbye to sync and drift issues — and check out our multitrack recording in Cleanfeed.

One of the things that I love about podcasters is their inventiveness. Coming from a live radio background, I was used to working a certain way that was a product of the environment I was familiar with. Podcasters really threw away the rule book and challenged some of my preconceptions.

Starting without professional radio equipment, but with technical knowledge, many podcasters have brewed up interesting new solutions to old problems, using modern equipment.

One which really suprised me was the importance of a separate audio file for each person in the podast. I knew of the old technique for journalists which was to conduct an interview by telephone, and take a separate recording at either side. It’s great for soundbytes, but leaves a slightly complex editing process, and it’s tricky to reconstruct the full interview as the timings are not always in-sync. I was even suprised to find this technique (and its flaws) being used in the same room; several hosts on a podcast, around the same table for a panel-style discussion, record their own mic into their own laptop and leave all the mixing and editing until later. But without a hardware mixing desk which I was taking for granted from my radio background, and with modern laptops readily available, that’s a great way to solve the problem and exactly how you would do it.

Most of us don’t have acoustic panelling in our living room or kitchen, and if this is your podcast recording environment then separate recording tracks is a useful tool to allow compensating for this, and other issues you might encounter in an interview or recording.

So how do we really polish this workflow for podcasters and producers? With Cleanfeed, of course. Ok, so enough background. You probably want to try this! We wanted to make this really easy to use:

Please try it out and familiarise yourself with these steps and how it works, first!

Why is Cleanfeed different?

Whilst others have made attempts to automate the technique of recording at separate locations, Cleanfeed is a little different.

First, Cleanfeed’s raison d’être: originally designed for live radio interviews, there’s absolutely no compromises on audio quality — you’re limited only by the quality of your mic and headphones.

Secondly, you get the recording instantly with no need to wait for the person you’re interviewing to upload their recording later. Audio is all recorded where you logged into Cleanfeed, so your interviewee can leave the system the moment they’ve finished the interview.

Thirdly, there are no timing drift or synchronisation issues. For the techies out there, the difference is that everything is recorded using the same ‘clock’. That means everything is sample-for-sample in sync. Don’t believe us? Make a recording, pause it and save each track. They’ll be exactly the same size in the file browser.

All of this encompasses the existing Cleanfeed feature set; the ‘Clips’ player gets its own track, the existing routing and level adjustment applies. It doesn’t have to be speech interviews; can even do it all in stereo in our ‘Music optimised’ sessions if you want!

Now it’s over to you

As I write this, this is just the beginning for this feature. Much like a lot of Cleanfeed, we’ve chosen to focus on building a very powerful audio engine under the surface first, then gently exposing it with a simple user experience.

So now it is actually usable, we wanted to put this out there for you. Everything is there technically to get a great recording, and you can do it right now!

There are also some obvious ommissions, for example as new people join the session they won’t be added to the multitrack recording yet.

So our work doesn’t stop here, and whilst we’re going back to more code we hope that this will be in parallel to receiving feedback from you, the friendly folks of the Cleanfeed community. Many of our earlier refinements to Cleanfeed’s recording functionality were driven directly by user feedback, so your contribution is really valuable to us. One of the things I have personally enjoyed about developing Cleanfeed is that it doesn’t have to be constrained by a need to mimic existing hardware or software, and as long as users are clear on the ‘beta’ label then we’ve got extra freedom to change just about anything before it’s official. Of course, once it’s out of beta we’ll be back to being a little more conservative with changes to the workflow.

Multitrack recording is a new feature that we’re previewing. It’s available to all users right now, even in the standard (free) Cleanfeed. When our beta period is over it will be exclusive to Cleanfeed Pro.