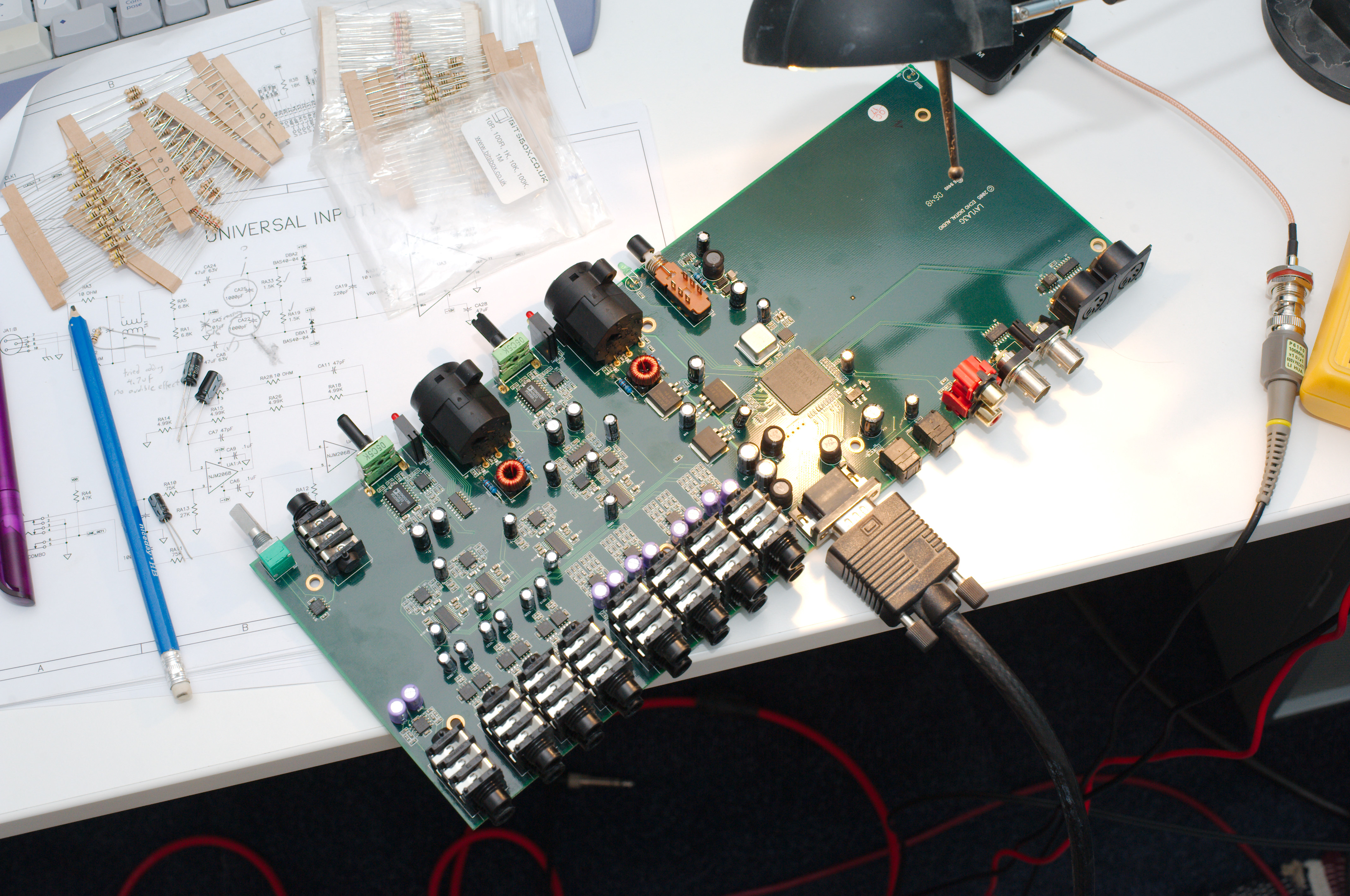 Layla has been my trusty companion for 10 years of audio projects, but recently she developed an unpleasant and annoying habit that took us both on an interesting adventure.

My Echo Audio Layla 3G audio interface and I go back a long way — she’s been used for a whole bunch of development projects. As a side effect, we used a rack of these to process and stream some of the the UK’s largest commercial stations, too. I’m principally a Linux user and developer, so at the root of all this is Echo’s freely available reference driver implementation, and its port to Linux.

So when I began working on Cleanfeed a few years back, Layla started to get used for mic input more than line input. Until one day somebody pointed out my ‘Clean’ feed wasn’t that clean at all; it was hissing like crazy. Let’s have a look at that noise (using another one of my favourite tools, the trusty SigBlips Baudline): So this is the hiss, looks like white noise, and it’s appearing on both preamps in exactly the same manner (the Layla has two microphone inputs). It’s also appearing whether a dynamic or condenser (phantom power) mic is used.

I’m not one to hesitate about taking the lid off expensive things, so let’s do that and have a good look: Despite being called ‘Sparky’ I’m more of a computer programmer than electronic engineer. But the hiss affects both channels, and basic problem-solving tells me that it’s most likely to be some circuitry that’s common to both microphone inputs. That pretty much means it’s:

One of these must be the source of the noise. But all of these checked out. And I’m getting white noise rather than nasty electrical noise, so probably not.

Something more sinister was going on, and the folks at Echo kindly helped out by providing a schematic. Without this I’d have been unlikely to get any further. So let’s dig in to one of the mic preamps:

Testing various components didn’t yield a lot, but I did discover that placing a capacitor from point A to ground would eliminate the noise. It seems that CA54 (a 1000pF capacitor) just wasn’t doing its job. A replacement needed perhaps? Here’s the relevant part of the board, with the suspect capacitor marked: Was this the correct fix? I eagerly ordered the correct value 1000pF capacitor; well, an assorted bag of 300 for the high price of £1.89 from eBay. On arrival, I held this 1000pF (1uF) capacitor in place only to find no effect whatsoever. Well that was a bit of a wild goose chase.

So let’s go back a few steps. Eventually, after some stumbling, I noticed that I could almost eliminate almost all the audible noise by completely shorting the circuit from point A in the diagram (the ‘cold’ side, negative input to UA9) to ground. It didn’t matter about the capacitor at all. But the same can’t be said for point B (the ‘hot’ side).

So that’s the fix, right? Hmmm. I’m not an expert, but shorting the cold side to ground effectively un-balances the microphone input, so that’s definitely not right.

The hot and cold sides are operating independently, whereas they should be mirrors of each other. The hot side has the microphone, the cold side has the noise.

So let’s look for a break in the circuit. 5 minutes with a multimeter and we have our culprit. It’s RA53, peeking out from just under the XLR: Let’s substitute it for a known good resistor by holding it in place, and the unit springs into life. The hiss is gone and the audio is impeccable.

Now the challenge of a permanant fix. Attempting to attach things to surface mount is a fruitless exercise, but thankfully we don’t need to do that if we bridge all the way through to the (non surface mount) components either side. But one puzzle remains. I’ve got the exact same failure on both preamps. Same resistor, same mode of failure. Could this be a physical fault? That resister is close to the XLR socket and it’s the only one that is. But on testing the resistor that was removed, it had itself failed and the fault wasn’t just a broken solder joint.

So, Layla lives on. I like to think she has some character, and this mystery will just have to be part of it…

Many thanks to the following people for their help and advice on this repair: Echo Audio; David Russell; and the folks at the fantastic diyAudio.com forums.