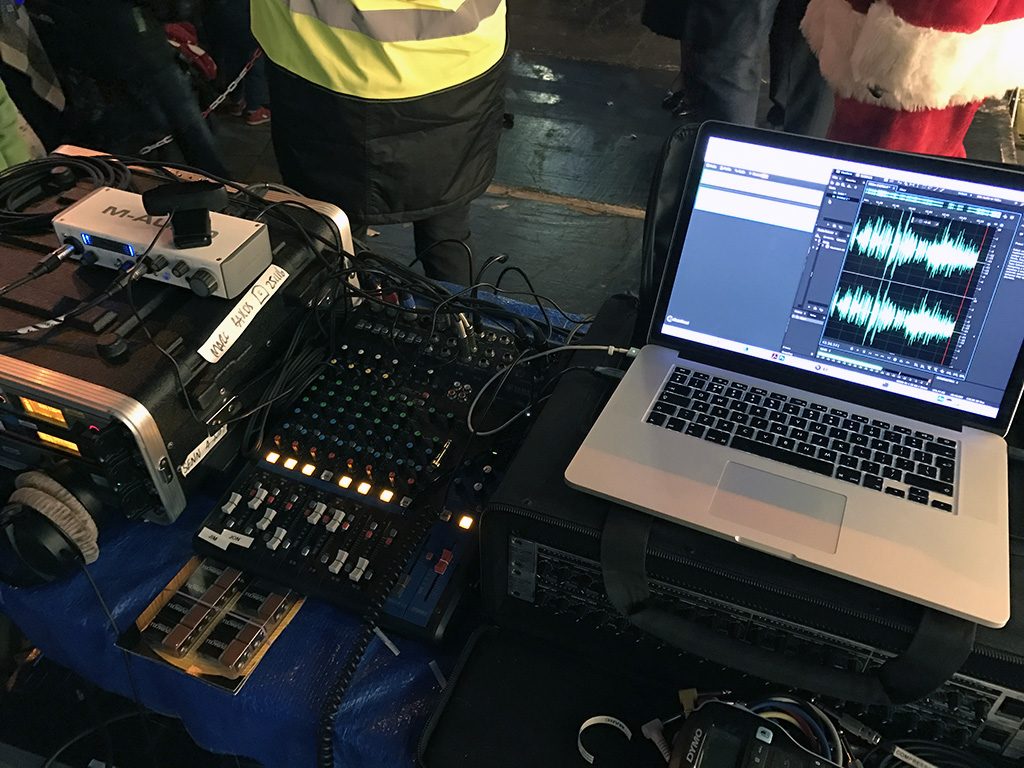 For Cleanfeed to remain relevant, competitive and useful, we regularly attend outside events. The event I cover below is one undertaken for a hospital station, Radio Wey (http://www.radiowey.org).

The Walton on Thames Festival of Light is a well attended Christmas event which celebrates Christmas; includes a festive Christmas market, the turning on of lights and most importantly, the light parade itself.

Radio Wey were proud to present this event, and even more so as the event was attended by well over 5000 people.

Here were the requirements:

Picking equipment for outside events can seem tricky and complex, but in reality it’s dead simple – providing you plan ahead… The above illustrates the thought process of the equipment required and how items would (roughly) be connected up.

In the case of this event, we had: Above is an example of some of the hired wireless equipment to link the two PA systems together.

The cover picture of this article illustrates Cleanfeed in action, once everything was connected up.

The final mix ‘out’ from the mixer was sent to the input of our very simple Cleanfeed setup:

The output from Cleanfeed was sent back out the M-Track interface back to the mixer for monitoring use only.

All necessary mix-minus [aux’s] were set up to ensure presenters didn’t hear anything they ought not to.
This meant that an aux send was set up to include everything except anything the presenter didn’t’ want to hear (normally not to include themselves).

Once we were happy that everything had been set up, we established a connection with the studio well in advance to the live stream going out.
We used Cleanfeed over a 4G connection, and we sent a mono feed (as we were only voice; no stereo music) back to the studio.

Once we were all connected up, it was then a matter of waiting to ‘go live’!

I think it’s fair to conclude that a lot of thought goes into planning and executing an outside event, especially one which yields a big audience.
If you ensure your plan works, then everything on the day should run smoothly!

In our case, it did – and was a big hit with everyone that came.